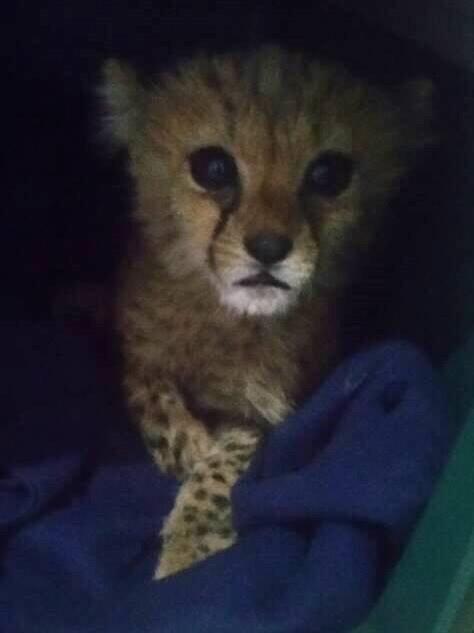 (OTJIWARONGO, Namibia, 29 August 2018) – A major victory in the fight against illegal cheetah trade was achieved yesterday in a courtroom in Somaliland when two subjects charged with wildlife trafficking were sentenced to 3 years in prison and a fine of US$300 each. The subjects were arrested when the Somaliland authorities, assisted by a local team managed by the Namibia-based Cheetah Conservation Fund (CCF), confiscated six cheetah cubs of different ages on August 5 in El Sheikh, near Berbera on the northern coast of the country. The cubs, now under proper care by the CCF team, ranged between 3 and 7 months in age, and displayed various degrees of malnutrition and dehydration.

Somaliland is a self-declared state internationally recognised as an autonomous region of Somalia, and is the main transit route for cheetah trafficking out of East Africa. An estimated 300 cheetahs are taken into the Arabian Peninsula each year to be sold in the illegal pet trade. CCF has been working to counter this trade since 2005, and in 2011 began building a local network and establishing working relationship with government authorities. Since then, CCF has assisted with the confiscation, care and placement of 47 cheetahs.

Just a few days before the trial, the Somaliland’s Forestry and Wildlife Conservation Law was ratified by the Cabinet. The Hon Shukri Ismail, Minister of Environment and Rural Development, stated that she “welcomed the decision by the cabinet to ratify legal international polices that govern dealing with the Conservation of Fauna (Wildlife) and Flora (Plants) in Somaliland,” adding that the country has now officially ratified five international and regional agreements including the African Convention on the Conservation of Nature and Natural Resources.

“Cheetah trafficking in East Africa is of great concern, as cheetah populations in the affected areas of Ethiopia, Somalia and northern Kenya are scarce and already facing numerous threats such as loss of habitat and conflict with humans,” said Dr Laurie Marker, Founder and CEO of CCF. “It is not often that confiscations end with a conviction,” she added. “We commend and applaud the Somaliland courts for this important landmark.”

As the court case was being tried, two more cheetah cubs were confiscated by Somaliland authorities in a remote area in central Somaliland and have also been placed under the care of the Hargeisa-based team

Photo caption: One of six cubs seized on August 5th.

Cheetah Conservation Fund (CCF) is the global leader in the research and conservation of cheetahs. Founded in Namibia in 1990, CCF maintains a research programme studying the biology, ecology and genetics of the cheetah and operates the only fully-equipped genetics laboratory at an in-situ conservation site in Africa. CCF has created a set of integrated programmes based on this research that address threats to the cheetah and its entire ecosystem, including human populations. CCF operates from the principal that only by securing the future of the communities that live alongside the cheetah can you secure a future for the species.