Trafficked cheetah cub. Photo © Patricia Tricorache/CCF.
Source cheetah populations
The Horn of Africa region, primarily Somalia and Ethiopia but also including neighboring countries such as Kenya, is thought to be the main source of cheetah cubs that are sold into the illegal live trade in cheetah, with most reported confiscations occurring in Somalia (60 percent of confiscations between 2005-2015). This region harbors a highly threatened subspecies of cheetah (Acinonyx jubatus soemmeringii), which is estimated to number less than 300 individual adults and adolescents. Access to the areas where cheetahs still occur in this region is limited, and hence remaining populations are poorly known, but available evidence suggests there are four populations in northern and central Ethiopia holding between 8 and 32 cheetahs each, and a larger population around the Kenyan-Ethiopian border holding around 191 cheetahs (see map below). These populations are extremely vulnerable to the impacts of habitat loss and conflict with human communities that threaten cheetah across their range, and now also face high levels of exploitation for the illegal pet trade.
Over the past year (August 2018 to July 2019), 33 cubs have been rescued from the trade in Somalia and are being cared for by Cheetah Conservation Fund. It is likely that these rescued cheetah cubs are the tip of the iceberg, with a much larger, undetected illegal trade in cheetah going unrecorded. Regardless, even this reported number represents a trade of 12 percent of the remaining known soemmeringii cheetah population. Relative to the surviving populations, this trade is large and is, almost certainly, driving the small, vulnerable cheetah populations in this region to extinction. 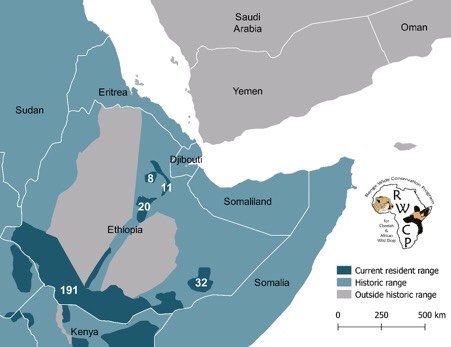 Cheetah in the Horn of Africa region are a distinct subspecies, A. j. soemmeringii, with only an estimated 262 adults and adolescent individuals left. These populations are therefore extremely small and vulnerable, as indicated by the numbers on the map, and any level of illegal trade risks driving them to extinction. Map courtesy of Sarah Durant.
The Role of CITES in combating illegal trade in cheetah
The increasing awareness of the impacts of illegal trade in live cheetah on wild populations has attracted the attention of CITES, leading to a series of recommendations and decisions to combat the trade at the 2013 and 2016 CITES meetings, which have resulted in positive steps towards addressing the illegal trade. However, at the most recent CoP, the CITES Secretariat proposed to downgrade efforts, effectively ending nearly all targeted activity to address trafficking in live cheetah. Kenya and Ethiopia, countries that harbor important source populations for the trade, provided significant evidence of ongoing trade to the CoP and drafted Decisions that, if Parties had agreed, would have stepped up action to combat this trade.
On August 22, when the CoP reached the agenda item on cheetah, a series of factors contributed to an unbalanced debate. This included confusion over the schedule itself — the Committee was running late and many heads of delegations from cheetah range states were in attendance at the discussions of ivory taking place at the same time in the other Committee. It was only with just 20 minutes left of the day that the Chair began the discussion of cheetah. The discussion became dominated by Gulf States, who, one after another, denied evidence of any ongoing demand or illegal trade in cheetah. When African range countries were allowed to speak, they highlighted ongoing evidence of illegal trade, but this evidence was denied by the Gulf States. After a heated discussion, the source countries gained support from the United States, who offered to read out the decisions into the record. Yet, without a clear explanation, this offer was refused.
Throughout the discussion, deference appeared to be given to the Gulf States and their denial of the existence of trade, while evidence provided by source countries was ignored. At the end of the session, the debate was shut down abruptly, before many countries had had their say, without consensus and any opportunity to postpone discussion to the following day. There was a clear disagreement between source and consumer countries with respect to the way forward, including the need for additional decisions. When Ethiopia tried to raise the issue again in plenary, which was their last remaining opportunity at CoP18 (and therefore for the next three years) to have their decisions re-evaluated, citing their concern that the debate had been shut down prematurely, it was too late. Under CITES rules of procedure, one-third of parties need to vote in favor of reopening discussions, and this vote fell just short at 29 percent when, once again, the Gulf States vociferously denied the problem.
It is sobering to remember that this was happening even while more than 30 cheetah cubs, caught in the wild in order to be trafficked into the pet trade, are being cared for in Somalia.
What happens now? 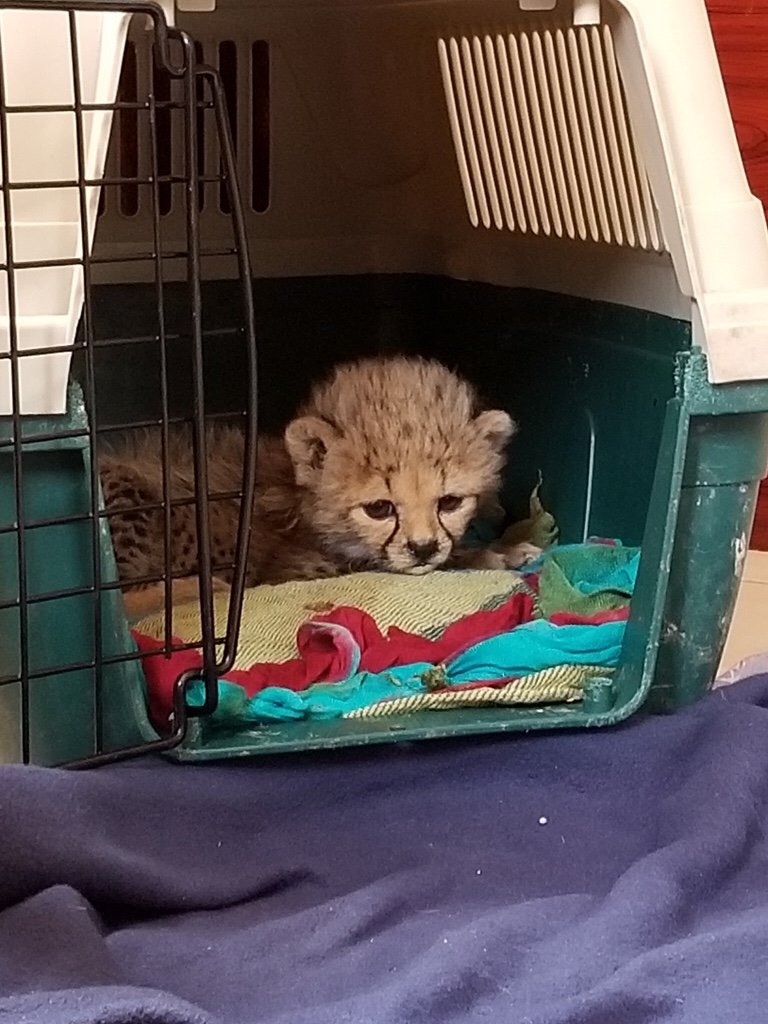 Trafficked cheetah cub. Photo © Patricia Tricorache/CCF.
The facts around the trade in cheetah are hard to pin down, since this is an illegal trade and therefore, by its nature, clandestine. This difficulty is compounded by the fact that the trafficking occurs across areas that are subject to varying degrees of insecurity and territorial disputes. For example, official records posted by Somalia do not include those from Somaliland, where a substantial number of confiscations of cheetah cubs take place. Moreover, this is a trade in a highly threatened species, where the numbers traded are small, and hence particularly hard to detect despite potentially disastrous impacts on wild populations. These difficulties in obtaining reliable data makes it easy for consumer countries to pick holes in data and dispute evidence.
Nonetheless, there is clear evidence that cheetahs have been traded into the Gulf States over the last two decades in sufficient numbers to impact wild populations, including an official report to CITES on the issue. It is possible that sale of cheetah in the Gulf has been reduced in the last few years, since some states, notably the United Arab Emirates, have introduced legislation against the keeping of dangerous animals as pets. However, if this is so, the question remains: Why are so many cheetah cubs still being trafficked through Somalia? The numbers of trafficked cheetah intercepted in the Horn of Africa are significantly higher than those in any other region in Africa, particularly considering the small size of populations left in this region. Why then are there so many videos posted of pet cheetahs online from within Gulf States? And, if cheetah cubs are not being sold into the Gulf States, then where are they being trafficked to?
At the CoP, it was extremely disappointing to see Gulf States and other countries not take the concerns of African range countries seriously, preventing collaborative efforts to combat trafficking in cheetah. It was also disappointing to see the way CITES handled the discussion around cheetah, appearing to take the protestations of consumer countries at face value, while discounting statements from cheetah range countries expressing a wish for more to be done to combat the trade. Source countries should not be put in a situation where their legitimate and evidence-based concerns about illegal trade are ignored, when the role of CITES should surely be to support source countries in their efforts to combat illegal trade.
A discussion that is allowed to be dominated by consumer countries risks giving an impression that African range states are expected to do most of the work in enforcing CITES, while consumer countries may do little enforcement and thereby implicitly allow the theft of natural resources from Africa. Such an unbalanced approach threatens to undermine conservation and sustainable use strategies in range countries.
CITES is the only international framework available to manage the trade in endangered species, and the fate of wildlife is better with such an international framework in place than without it. However, CITES suffers from underfunding, resulting in a lack of resources for implementation, which contributes to poor enforcement of its decisions. But the recent experience with cheetah shows that CITES also needs to ensure that the voice of range states are fairly heard.
Unfortunately, the small and vulnerable cheetah populations in the Horn of Africa cannot afford to wait another three years, until the next CITES CoP, for new decisions to be made. Without immediate action, we may be looking at the extinction of the soemmeringii cheetah subspecies in the wild. It is now up to the cheetah range states, particularly in the Horn of Africa, and their conservation partners, to work to keep up the pressure to ensure that immediate action is taken to save the cheetah — and to ensure that their voices are heard. 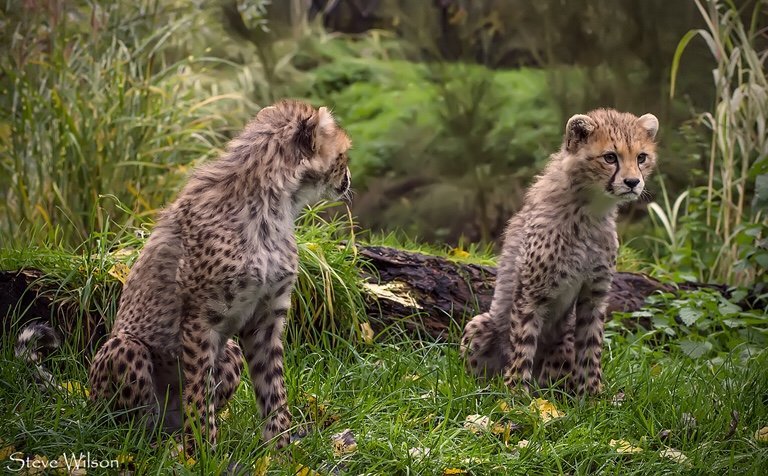